Afro-Brazilian rhythms for all ages Samba has been on the music menu in UK schools for a while now. Its energy, accessibility and potential for differentiation make it an ideal setting for musical exploration. While samba (often used as an umbrella term for other sub-genres), is perhaps the best known of the Afro-Brazilian styles outside of Brazil, there are a number of other genres to add to your rhythmic repertoire. Ollie Tunmer, director of Beat Goes On, tells us how

In Beat Goes On, when teaching Afro- Brazilian percussion, we use a three-step approach:

This allows for a deeper understanding of the rhythms, for development of literacy skills and for opportunities to learn key terms and elements of Afro-Brazilian culture.

We also teach Afro-Brazilian rhythms in our body percussion workshops and CPD sessions, imitating the sounds of percussion instruments through body timbres and exploring the visual possibilities that our bodies can offer. Typical questions might be:

» Can you combine foots stomps on the pulse, with a syncopated clapping rhythm?

» How can you make the rhythm look as good as it sounds?

Afro-Brazilian culture offers a range of rhythms that can be differentiated and adapted to suit a wide variety of learning contexts. From the popular favourite samba batucada to the syncopated maracatu, here are some of our favourites. The first three are suitable for primary and above, the last is best done at secondary and above.

The fast, energetic Rio-style samba batucada is a fantastic starting point for ensemble musical exploration. West African rhythms are combined with instrumentation developed from Portuguese marching bands. The mid and low surdo (the big bass drum) play simple but essential pulse-based rhythms that all parts relate to, while the high surdo, repinique (high pitched drum, similar to a timbale), caixa (snare drum), tamborim (small, hand-held drum) and agogo (like a cowbell but with 2, 3, or 4 bells), provide opportunities for higher level differentiation through syncopated patterns and improvisation (see table 1).

The chocalho (a very noisy shaker) develops co-ordination, stamina and groove, with its forward and backwards semiquaver pattern. Try using the quieter ganza if noise is an issue! Sub-genres under the samba umbrella include bossa nova (samba jazz, from the 1950s and 60s), pagodé and roda de samba (both of these are played at parties and jam sessions).

» Variations of dynamics and texture

» Musical leadership in the role of the director or (highly advanced) mestre. 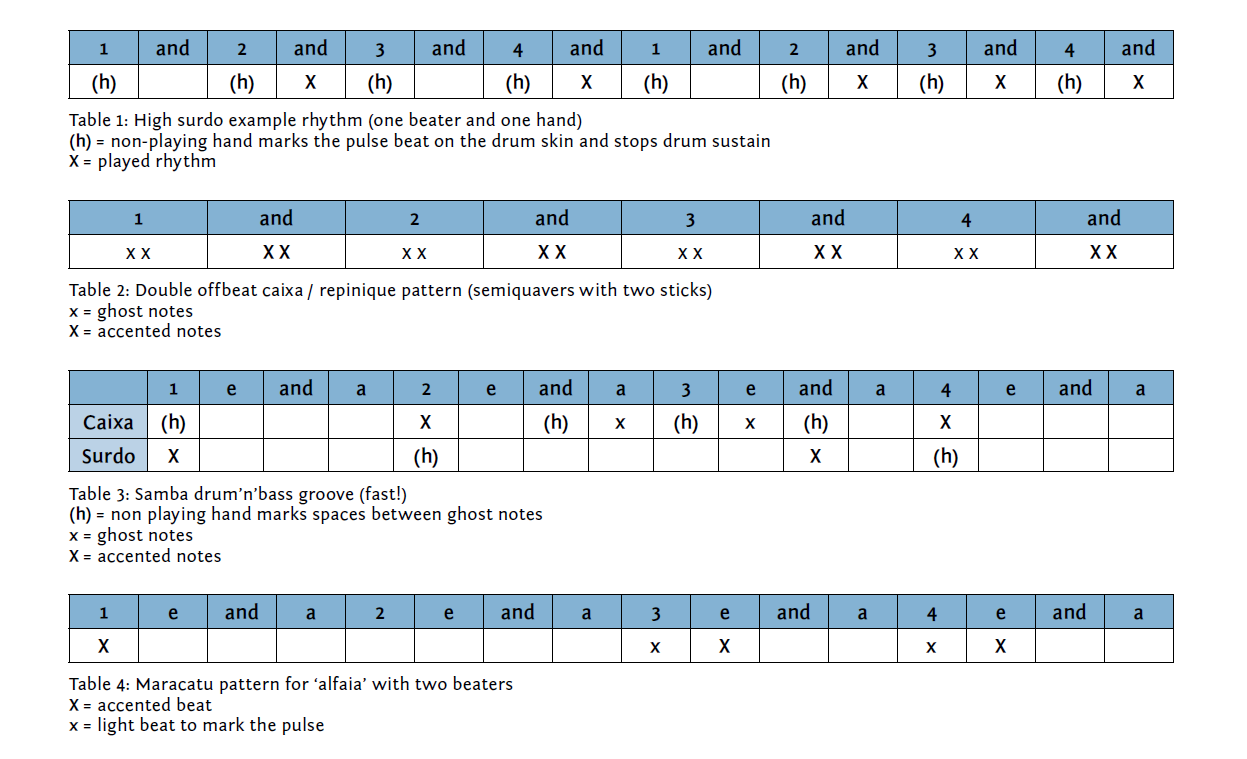 The influence of Bob Marley and his contemporaries has been expressed in this style that developed from the late 1960s onwards led by groups including Olodum, Ilê Aiyê and Timbalada. Olodum feature on Paul Simon’s ‘The Obvious Child’, with the video filmed in their home city of Salvador, Bahia in north-east Brazil.

The reggae element of samba reggae is expressed through slower tempo and the use of single or double offbeats, played on caixas and repiniques. Like with batucada, the mid and low surdos maintain pulse-based roles, leaving high surdos to play more developed patterns and longer breaks (see table 2).

Samba reggae has also developed into other forms including the upbeat axé, made popular by artists including Timbalada, led by Brazilian icon Carlinhos Brown.

Like with ‘mangue beat’, musicians often like fusing traditional with contemporary. Samba has been mixed with punk, funk and drum’n’bass among others, to create new and exciting live sounds. In an educational context, this can also be a great opportunity for your students to involve their own musical tastes and orchestrate them into a samba context (see table 3).

Like samba batucada, this is an example of west African culture that was brought to Brazil with the slave trade, in this case to the north-eastern state of Pernambuco.

Instrumentation includes: the alfaia, a wooden shelled rope drum with animal skin; caixa; agogo; gongue, a very big cowbell; shekeré , a gourd shaker wrapped in a net of beads; and mineiro, a metal cylindrical shaker. All instruments can be substituted for similar sounding instruments in a classroom context (see table 4).

Musicians often fuse traditional Afro- Brazilian rhythms with contemporary ones. One such example is ‘mangue beat’, a fusion of maracatu with hiphop, punk and rock, created in the early 1990s by artists including Chico Science and his band Nação Zumbi.

There are many other fantastic Afro- Brazilian styles to explore including afoxé, baião, forro and coco. Get listening and see what else takes your rhythmic fancy!

An extra exercise for use at EYFS, along with song recommendations for all the exercises here, can be found at tinyurl.com/mt7-BGO-EYFS. Thanks to Lily May and JP Courteney for additional content.

For all workshop, CPD and conference enquiries and for more free resources and video, please visit beatgoeson.co.uk.

The Beat Goes On UK are exhibiting on stand P5, and are delivering the opening session at Music & Drama Education Expo | Manchester on 10 October. Make sure to visit them at the show and register to the show for free.